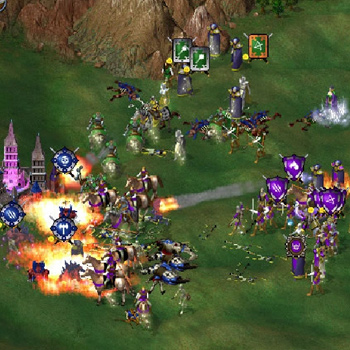 Enter the world of Khaldun, where Immortals vie against each other in a timeless war between Light and Shadow, and experience real-time strategy as you never have before.

* Multiplayer supports up to 8 players who can choose to play as one of four factions, all struggling for supremacy in a war-torn world.
* Command large armies of archers, footmen, cavalry, and even legions of undead.
* Over 40 unique units to choose from to build your army.
* Wage war in multiple environments that include lush forest, rolling hills, and barren desert.
* Scores of magical spells ranging from protective blessing to devastating fireballs.
* Fully functional editor with random map generator that allows players to custom make their own campaigns, single scenarios, and even death match maps.