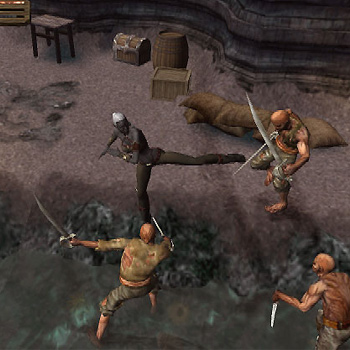 A hack-and-slash adventure set in the Forgotten Realms, Baldur's Gate: Dark Alliance marks the console debut of the renowned RPG series, albeit in a somewhat altered form. Experience points and character skills still play a vital role in leveling up your chosen character (of which three classes are available: a dwarven warrior, human archer, and elven sorceress), though you'll find these are the only RPG aspects retained. Spanning three acts, players will need to perform a variety of quests and sub-quests, each of which will reveal more of the game's plot or provide a good opportunity to pilfer some new weapons or items.

A large menagerie of evil beasts, mutants, monsters and undead will swarm the player at every available opportunity, and as such, armor and weapons will be needed to annihilate them. Increasingly powerful items can be found in the game's many dungeons, caves, and forests, or bought from the local town store. Your character does have a weight limit however, restricting the number of items you can carry at one time. Rudimentary puzzles occasionally block your path, though the majority of the time you'll be up to your neck in enemies. Each act also contains powerful boss characters, many of which tower high above your character.

Real-time 3D environments allow for a number of interactive elements, such as exploding barrels and movable crates. Should the need arise, the camera can be manipulated via the right analog stick in order to better ascertain your whereabouts, or more importantly, the location of your enemies. Included in the title is a cooperative mode, which allows two people to work together throughout the entire adventure, sharing not only the spoils of combat, but also the danger that goes along with acquiring such items. Baldur's Gate: Dark Alliance features voice talent from popular titles, such as Legacy Of Kain: Soul Reaver and Metal Gear Solid.