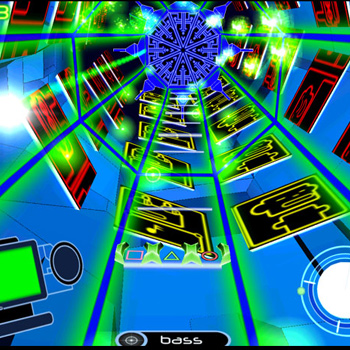 Step inside the music, be surrounded by stunning 3D graphics, remix and re-imagine the songs as you navigate the playfield and youre playing Frequency, Harmonixs much-acclaimed debut. Keyed to the rhythms of electronic dance music, Frequency  introduced the mind-blowing visuals and interactivity that became Harmonix trademarks; merging real-time music making with insanely addictive gameplay. Players collect jewels in a cyberspace tunnel, surrounded by eight walls that represent instruments from a given song. As the game progresses, you remix those sounds while racking up scores, creating your own unique version of the song. With an online add-on, this was the first music game ever to feature online, multi-player capability. The soundtrack included dance luminaries Crystal Method, Paul Oakenfold, Orbital and more. Released by Sony Computer Entertainment in 2001.