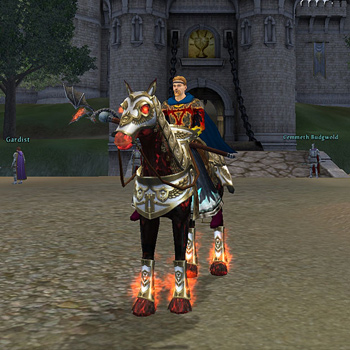 Set in the period immediately following the death of King Arthur, Dark Age of Camelot is an online role-playing game which offers a blend of killing AI controlled monsters, and killing (or being killed by!) player controlled Invaders from Other Realms.

Each copy of the world (of which there are many, each holding up to 3000 simultaneous players) is divided into three competing realms: Albion, Midgard and Hibernia. The realm of Albion is based on Arthurian legend, whereas Midgard is modeled after Norse mythology, and Hibernia on Celtic myths. Each realm offers extensive internal areas for straight "monster-bashing" of a style similar to Everquest and other Diku MUD derivatives, as well as a large frontier region which can be invaded by players of the competing realms.

Dark Age of Camelot is a subscription based game.