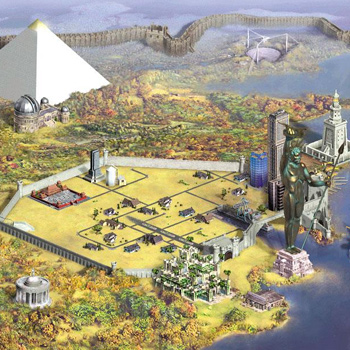 The latest installment in Sid Meier's Civilization series. Civ3 is a turn-based game where the objective is to rule the planet.

Players control one of 15 Civilizations (Aztecs, Egyptians, Russians, etc). Each Civilization has its own particular strengths and weaknesses -- some are more scientific, for example, while others have stronger cultural or military attributes. The point of the game is to expand the influence of your civilization through resource management, conquest, or trade with other civilizations. As game time progresses from ancient times through the modern era, your Civ will acquire new technologies, which in turn enable interesting new abilities and enhanced power.

Since there are several ways to win (military, diplomatic, or cultural), it is up to each player to determine how best to manage the division of labor -- should you spend critical resources building new cities, or should you instead push your efforts into researching new weaponry? Such decision-making and management skills are the keys to this game.