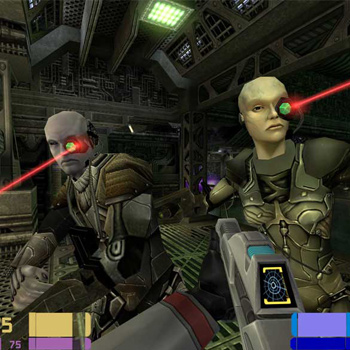 Prepare to join the Elite Force. When a marauding species captures the U.S.S. Voyager, only a member of the newly formed elite security force - The Hazard Team - can save the crew, the ship...and the Galaxy itself. Commanded by Lt. Tuvok, you'll leap into action to defend the Voyager from assault, battle through derelict spacecraft, infiltrate a Borg cube and take on the ultimate colonization force - all the while facing annihilation at every turn. No one said being a hero was easy.

Become a Part of the Star Trek World: Explore in and defend the Voyager, designed according to the actual shop set used on the television show. Battle the Borg, Scavengers, Hirogen and more, backed by Star Trek sound effects, music and visuals. Animating textures, weapons and motion-captured movement add to the realism - corridors collapse, wall explode and enemies materialize directly in front of you.

An Officer with a Mission: Just as in the TV series, missions include team and solo segments. Face moral dilemmas during your missions - will you rescue ship personnel or follow orders?