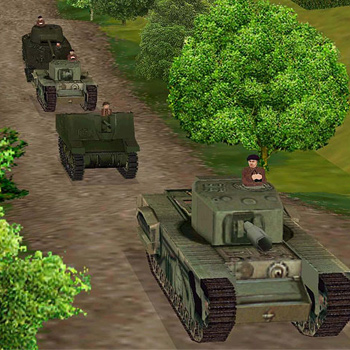 Combat Mission is a 1-2 player, turn-based, simultaneous-execution 3D simulation of WWII tactical warfare. It combines unparalleled game depth and ease of use with a true 3D environment. The move to the 3rd dimension is not just to look cool, rather it it improves the accuracy of the simulation. Think of the world around us - it's all 3D. True 3D LOS, 3D spotting, 3D terrain, and 3D trajectories are a lot more realistic than 2D approximations, so that is what CM delivers!

Combat Mission: Beyond Overlord takes you from Normandy 1944 to Germany 1945 on World War Two's Western Front. Play as Allied or Axis, ranging from US Airborne to German Volkssturm. Battle across the bocage, tackle a village or two, drive through the plains, push into the woods, and slog it out in cities. CM provides all this and more with its historical scenarios and campaigns. And if there is a battle that isn't covered, make it up yourself with the easy to use editor.

Units are squads, teams, and individual vehicles. You can command a force as small as a platoon, or as large as a reinforced battalion. Each man and weapon is kept track of for maximum realism. For example, check out what a Sturmgruppe squad looks like.

Each turn is equal to 60 seconds of combat. Players give orders in a turn-based fashion, and then these orders are simultaneously executed for 60 seconds of "real time". Then the next orders phase begins. A typical scenario lasts about 40 turns, or 40 minutes of simulated combat. There are also operations in CM, but not like you are used to. You are put in command of a force tasked with a single ultimate objective. You might have an afternoon or several days' worth of combat to achieve your objective. You fight a small engagement (20-30 turns or so), then move on to another after a brief rest and refit. Fight during the day, at night, or into the early hours of the next day. It all depends on the campaign and your skills.

There is so much new, different, and better about Combat Mission that it is hard to know where to start! Most features break with "standard" conventions, like spotting via sound, or misidentification of targets. Others simply do a much better job, like the instant feedback 3D LOS check. Still others go into uncharted territory, like the adjustable waypoint movement system and incredibly accurate armor penetration algorithms. Check out all the links associated with Combat Mission and catch a glimpse of some of what Combat Mission offers.

We can not even begin to tell you how much love and effort has been put into the research. Whether it is the detailed TO&Es (Tables of Organization and Equipment), accurate OBs (Orders of Battle), weapon characteristics, or the intense armor penetration algorithms (be prepared to be surprised!), Combat Mission brings historical integrity to a new level.

Just think about it... amazing historical detail, unparalleled features, incredible ease of use, and cutting edge 3D audio and visuals all wrapped up into one package. Big Time Software, the Developer of CM, has a long history of delivering the goods. You won't be disappointed!