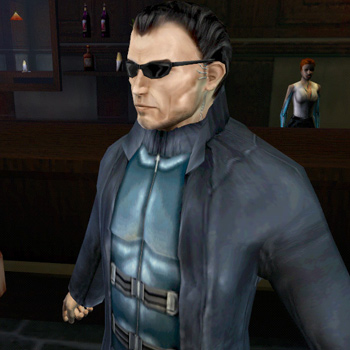 In the future the world is chaos. Terrorists, drug czars, and outlaw states rule the globe using violence and subterfuge as tools in their push for global conquest. Economic disparity is at an all-time high and many predict the collapse of the world economy. To top it off a deadly virus known as the "Gray Death" eats away at humanity.

In this dark cyberpunk RPG you play the role of a single UNATCO anti-terrorist agent pitted against an elaborate global conspiracy. While your character is essentially fixed within the story-framework of the game you can customize yourself with different skills in specialized areas like weapons, technical, and charisma-type. The game world is somewhat expansive and fairly open to accommodate different approaches to solving the same problems, depending on your preferred style of play. Characters can also have nanotech "augmentations" to enhance or add extra abilities.

The game interface is typic of a first person RPG/action-adventure game. The world is rendered in first-person 3D and camera segues are sometimes interspersed to transition the gameplay or expose new story elements. Combat takes place in the same interface, similar to a FPS game.