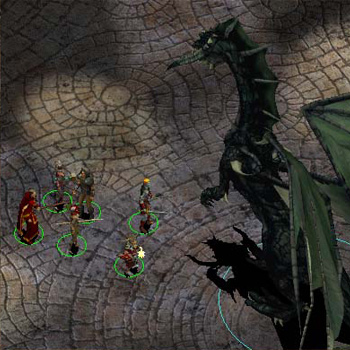 Welcome to the beautiful land of Amn, where the sun always shines and evil mages grow and prosper. One of these is the powerful sorcerer Irenicus, who takes delight in studying mortal offspring of the gods -- such as you. Remember Baldurs Gate 1? Youve been revealed to be a child of Bhaal (aka Lord of Terror, Bringer of Destruction, and so on), and your battle against the evil side of your soul is the main theme in Baldurs Gate 2. At your side: The well-known companions Imoen, Jaheira and Minsc (and his hamster Boo, of course) as well as a score of new potential party members. All in all, there are 16 NPCs to join you on your journey; however, your party consists of a maximum of 6 characters.

As in Baldurs Gate 2, the frequent battles are real-time, but can be paused at any time with the space key. You may then think over tactical decisions, issue new orders or chose a spell. Theres plenty of those: With over 300 magical formulae, the repertoire has almost tripled since Badurs Gate. Upon character creation, you can chose three new classes (sorcerer, monk, barbarian) and a lot of new specializations for the already existing classes; a paladin can become a dragon slayer or an inquisitor, for example. The weapon categories have been split up; instead of specializing in blades, you now have to chose between long swords, two-handed swords, bastard swords, katanas and scimitars. All in all, there are 20 weapon categories and 4 fighting skills like two weapons.

The backgrounds may now be viewed in the resolution of 800x600 pixels, as well as the old 640x480. The game also supports 3D accelerators for improved lighting effects.