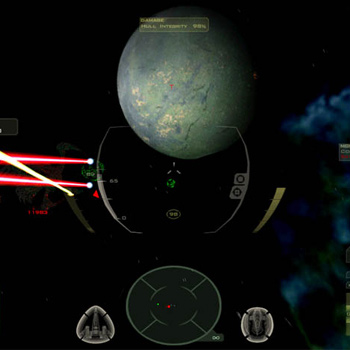 It has been 32 years since GTA lost contact with Earth. As a young pilot joining the fleet of the GTVA (Galactic Terran-Vasudan Alliance), you will be fighting the Neo-Terran Front, a rebel faction that opposes GTA's alliance with the Vasudans. Then the Shivans showed up again...

Freespace 2 is basically bigger and better Freespace. You get better ships (you can fly all the older ships if you like), more and more powerful weapons (both guns and missiles), and capital ships that can actually put up a fight with their anti-fighter beam cannons, turrets, flak, and missile launchers.

The capital ships now also engage each other with HUGE beam cannons that shoots beams WIDER than your craft! The beam can and do punch STRAIGHT THROUGH the enemy ship! Watch two or more of these leviathans fighting is like watching a Sci-Fi movie, except you are IN it! Contribute to the fight by flying bombers (with huge anti-ship torpedoes) or fly defense and take out the enemy bombers. Fly escort missions to protect assets, recon enemy assets, test new weapons, even fly a few missions for SPECOPS.

Freespace 2 features full multiplayer support at PXO (Parallax Online) and SquadWars.com, with co-op, team-based, or free-for-all dogfight, with many different missions to choose from.

Freespace 2 also includes FRED2, a full featured editor that you can use to create your own missions and campaigns.