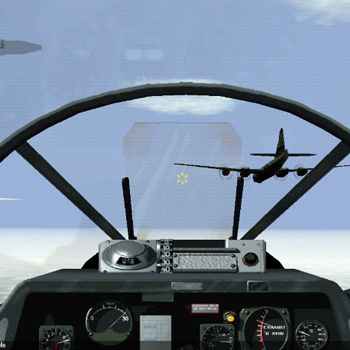 Mig Alley is simulation from the creator of Flying Corps. Set during the Korean War, it lets you command P-51 Mustangs and F-86 Sabrejets against the MiG-15's and MiG-17's. You can plan solely as a pilot and fly your missions, or be the 'air boss' and plan/execute the air war along the entire Korean front.

There are multiple aircraft to master, from props to jets. A wide variety of missions are featured, from dogfights and sweeps to close air support and bombing runs. Do well and you'll SEE results from your efforts reflected in the dynamic campaign. Online players can join multiplayer dogfights of up to 12 players. At times there are up to 100 aircraft in the air simultaneously. All terrain graphics and topography are based on actual photos (aerial or satellite). You can customize your plane's paint job with the built-in paintshop.