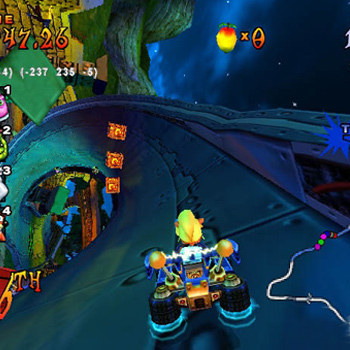 The player can race a full storyboard game as any one of the characters, fighting to beat the ultimate (and cheating) racer from another planet, Nitrous Oxide, who wants to turn the Earth into a car park. Each of the main races are against 7 other AI competitors, with 5 "boss" races against a single boss character.

To help you along your way are a whole bunch of weapons, ranging from missiles and rolling bombs to booby-trapped TNT crates and the leader-seeking orb.

There are also a few arcade modes, sub-games and battle games against up to 4 other players.