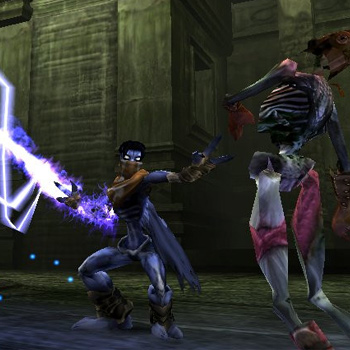 You play as Raziel, a vampire damned to a hellish fate by your leader and master, Kain. He was the original vampire in Blood Omen: Legacy of Kain and now has become a powerful leader and warrior in the world of Nosgoth. The reason behind your penance is because of Kain's jealously due to your superiority caused by accelerated evolution.

Wings form out of your sides and you are now better than the arrogant Kain. Once Kain discovers your power, he attacks you and sends you into a swirling void of no return. When you awake, your body is torn apart and your mouth is now just a gaping hole. You are hell-bent on revenge against Kain and your brothers, all of whom share vampire powers. With the help from a mysterious man known only as The Elder, you must qualm your wayward spirit.

Your task is to navigate the world of Nosgoth looking for clues and fighting off hordes of creatures, including several types of vampires. The mission you are traversing is non-linear, thus you can go anywhere, anytime. The landscapes range from mountainous terrain to underwater dungeons. Each corner is murkier than the next in this dark, dank, damned world.