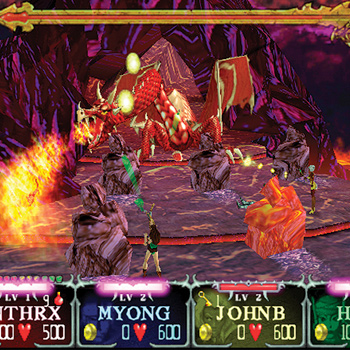 As many as four (Expansion Pak required) can band together in an epic quest through seven magical worlds -- three of which are brand-new to the home version -- to defeat the vile Skorne.

The nonlinear action begins in a hub, which leads to the worlds, each with two to five levels. You can complete a level in one world, then move to another world, returning later to finish a new level in the first world.

Developer Atari Games has delivered four new characters in addition to the four in the arcade version. Each character will have unique special attacks. Controller Pak support will allow players to team their evolving characters.

Enemies, bosses, power-ups, music and sound effects are all getting radical makeovers. Atari is busily remapping carryover levels and cooking up devious new puzzles and hiding places for items, so don't even think of cribbing from the coin-op version. Graphical updates include real-time lighting, which is nowhere to be found in the arcade version. The N64 Expansion Pak pushes plenty of polygon-based enemies onto the screen.

The essential action -- team up with others, find keys, magic, runes and other items, and beat the stuffing out of anyone in your way -- remains unchanged from the arcade hit. Atari has delivered a far meatier storyline, though, spiffed up by cinema cut-scenes at the successful conclusion of a world.