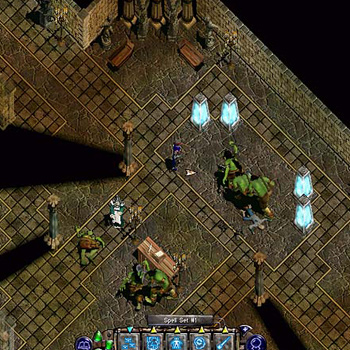 In Nox, a fantasy role-playing adventure played from third-person perspective, you can choose one of three hero classes: warrior, wizard and conjurer. As a warrior, strength is the dominant attribute, as physical ability to wield weapons and wear armor is tantamount to success. Choose the wizard to explore the art of spell casting as you make your way through the varied environments and locations of Nox, learn to set deadly magical traps and create disconcerting illusions. Or, you can become a conjurer, endowed with the ability to summon and control creatures to do your bidding -- a hero with a mix of both warrior- and wizard-like attributes.

Both the wizard and conjurer have specific spells (45 and 24 respectively) with which to engage the enemy while the warrior has five skills ranging from a berserker charge to the ability to see invisible items. More than 18 weapons and nearly a dozen types of armor (not all usable by each class) are available and run the gamut from leather to plate mail. These arsenals are used to combat a varied menagerie of Nox beasts including such creatures as bats, spiders, trolls, scorpions, imps and ghosts, to name a few.

Use the Westwood Studios multi-player facility, Westwood Online, to battle with or against up to 31 Internet foes. Several multi-player options are provided including Arena, Capture the Flag, Elimination, Noxball and King of the Realm. Nox also supports 32 players via a LAN connection.