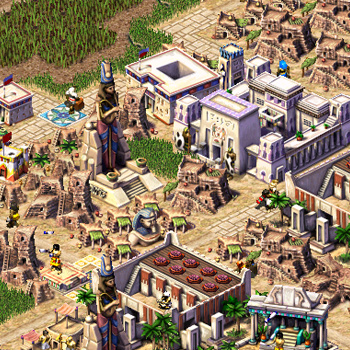 Pharaoh takes gamers back in time to roughly 3200-1350 BC. Set in Egypt, you are the ruler of a village who dreams of uniting all of the settlements in the region. Visions of a united Egypt with sprawling cities floods your imagination. This is what you want but do you have the ability to accomplish it?

Pharaoh's primary mode of play is set up like a campaign. It is divided into time periods that each contain a group of missions. Before each mission the objectives are described and must be met before the next mission, and eventually next time period, can begin. Missions are not exact duplicates of events that took place in Egyptian history but they are influenced strongly by history.

During missions it is likely contact with others will be made. Other cities and sometimes even Pharaoh will ask for your services. Services may include someone asking you for some food or military assistance. At any time it is also possible to be invaded and completely wiped out. While you may not instigate a war, some people may attack you simply because they wish to expand. Dealing with foreign affairs is one of just many aspects that will be encountered. Attempting to become one of the greatest families in history will require players to tackle every aspect one could imagine as well.