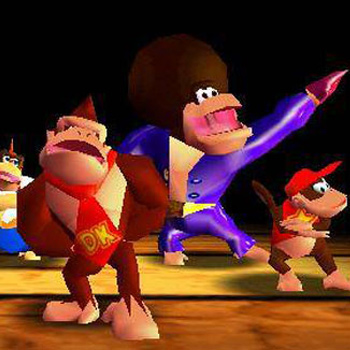 Donkey Kong 64 is similar to Rareware's other Nintendo 64 platformer series, Banjo Kazooie, but starring Donkey Kong and his friends from the Donkey Kong Country games. Several new features have been added to the game, like being able to change between different characters with different weapons and abilities.

As with many platformer games players will run around the various levels, jumping, swimming, and climbing where needed. Each level has multiple objectives, such as collecting DK's stolen golden bananas, collecting bananas color coded to each of the five characters, and miscellaneous other objects that need to be found to eventually complete 100% of the game. The player starts only being able to choose Donkey Kong, and must rescue the other four characters from the early levels before they can be used. By visiting Cranky Kong in each level more moves can be learned for each character, allowing them to complete challenges and reach sections in levels that were previously inaccessible.