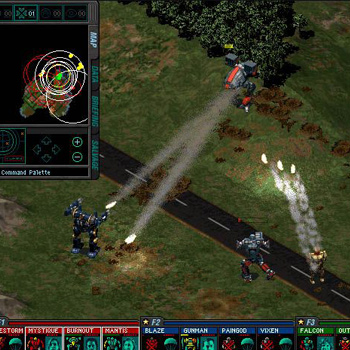 It's time to drive the hated Smoke Jaguar Clan from Port Arthur once and for all! You take on the role of the commander of a lance of the First Davion Guards. Through a series of tough, challenging missions, you must carefully plan your attacks, spend Resource Points wisely, and keep your people alive.

This Real-Time strategy game features 18 different types of 'Mechs, several types of vehicles, repair bays, artillery barrages, mine fields, forests that you can burn down ( >:) ), highly-explosive containers, 'Mechs that limp when their legs are damaged, missile and Autocannon turrets, and tons of other awesome things.

During each mission, you can capture buildings to get weapons. You can also salvage enemy 'Mechs if they aren't too badly damaged. You are awarded Resource Points which you can use to repair 'Mechs and buy new 'Mechs, weapons, and 'Mechwarriors. Your 'Mechwarriors will advance in different skills (gunnery, piloting, jumping, and sensors) as they use them in battle, so if you want a pilot to get better at gunnery, order him/her to attack targets more! They can also be injured or killed.