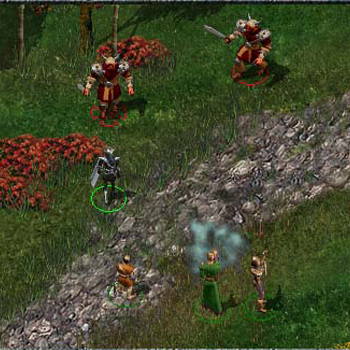 Baldur's Gate is a role-playing game that uses the rule set of Advanced Dungeons & Dragon (AD&D). You create your hero by choosing one of the available classes (fighter, thief, mage, priest, ranger, and druid, including sub-classes, dual- and multi-class characters), his (or her) alignment, weapon proficiency etc. For the combat system, a special engine called Infinity Engine is used: the battles are turn-based, but are so fast-paced that the player has an illusion of fighting in real time. You can pause the battle at any time and assign commands (such a spells) to your party members. You can also freely move them around during battles. Set in the universe of Forgotten Realms, Baldur's Gate is the first part of the saga that lets you explore various towns and wilderness, undertake many side-quest, and find companions for your long journey.