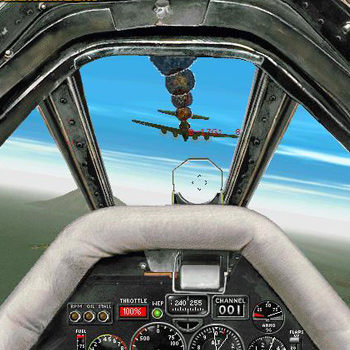 Sequel to the first online multiplayer flight simulator, the legendary Air Warrior. The premise of the game is to offer an extensive collection of WW2 planes to go head to head in multiplayer dogfights with up to 100 pilots at the same time.

Though its main focus is multiplayer gaming, this edition of Air Warrior also aims to be a single player success with the addition of 360 pre-made missions sprawled over branched mission tree-like campaigns. Most of the missions take place in Europe but several pacific historical engagements are included, you'll be able to defend Pearl Harbor, make a B-25 raid on Tokyo, try to destroy the Yamamoto as well fighting the battle of Britain, etc. With every mission playable from either the Allied or Axis side.

In total the game includes 45 aircrafts, each with their own flight models, cockpits and distinguishing features. The game uses flat polygon graphics with resolution support of up to 1024x768.

As a bonus, the game includes a couple of short WW1 and Korean scenarios (with their own planes), four ground vehicles (for multiplayer use only) and a mission editor.