Star Wars: Behind the Magic 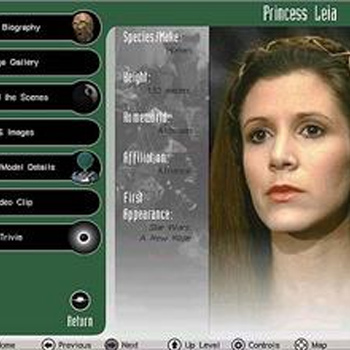 Star Wars: Behind the Magic is an interactive CD-ROM released in 1998 by LucasArts. It was designed as an in-depth look at the Star Wars trilogy and features a preview for Star Wars Episode I: The Phantom Menace.

Behind the Magic is spread over two discs. Among their features include a detailed look at the Star Wars trilogy (with a complete script), details of the characters, locations, and technology, and a look at the making of the movies. A searchable glossary of entries is available as well. Several games are included as well, including a trivia game and an area where you can test weapons on a stormtrooper.

Perhaps the most celebrated feature of Behind the Magic is its inclusion of several deleted scenes from Star Wars Episode IV: A New Hope. Among these is the Anchorhead Story of Star Wars, which includes the famous "Biggs Scene", where Luke Skywalker and Biggs Darklighter talk on Tatooine, and a scene where Luke talks to his friends after witnessing the opening space battle. Two other bits of rough footage are also included: one of Luke watching the space battle through binoculars and an earlier cut of the Mos Eisley cantina scene.

The box includes a limited-edition full-color print of a painting by artist Ralph McQuarrie, "Yoda and R2-D2 in the swamps of Dagobah".