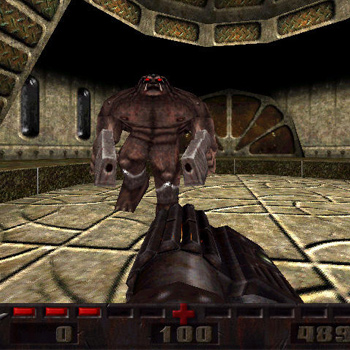 The prison transport ship Vortex Rikers was on its way to a penal moon colony when an unplanned course change led to it being caught in the gravity well of an uncharted planet. Not many aboard survive the crash landing, and those that do find this new world to be one full of strange beauty, but also many dangers. Not only is it full of dangerous wildlife, but it is the setting of a conflict between the ruthless Skaarj and the peaceful natives they have enslaved, the Nali. As one of the surviving prisoners, the player must escape the wreckage of the Rikers, navigate through Nali villages and temples, Skaarj mines and refineries, other crashed ships and many more locations, with the ultimate goal of finding a way off the planet.

Unreal is a first-person shooter. Its story is mostly told through short text messages, deciphered via a translator from computer stations, personal logs, books and signs. The game features a weapon arsenal of ten guns, each with two firing modes. Besides standard pistols, rocket/grenade launchers, miniguns and sniper rifles, there are such items as the Bio Rifle, which fires blobs of toxic waste which stick to walls and enemies, the Flak Cannon, which sprays deadly shrapnel, and the Razorjack, which shoots spinning blades that ricochet off walls. The secondary firing mode might allow a charged shot, sacrifice accuracy for speed, or even make it possible to guide the projectile.

The game also includes a multiplayer mode. Ten deathmatch maps are available for free-for-all, team deathmatch or a variant called "King of the Hill". A special mode is DarkMatch, for which one special map is available. In DarkMatch, the map is without any illumination, and players must use a searchlight to see anything. The deathmatch modes can be played against bots, and the game also offers a cooperative version of the single player campaign.