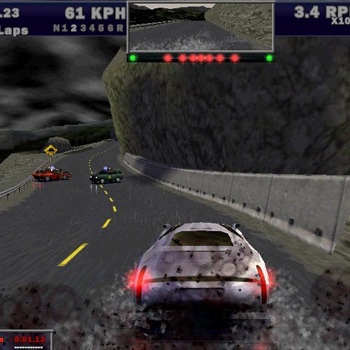 In the third major installment of Electronic Arts' Arcade racing series, there are several modes of play available. You have the standard race, with one big difference - now there are traffic cops out to ticket you for your excessive speed. Alternatively, you can take your turn with the radar gun and attempt to pull over speeding computer or human racers.

Returning to the flavour of the original Need for Speed, this adds a new Pursuit mode, where you must out run the cops through fast, open area tracks, while also out-lasting the rest of the pack. Another new mode is knockout, where you race through all the tracks, and whoever is last after each race is knocked out. The winner is, of course, the one that lasts the distance.