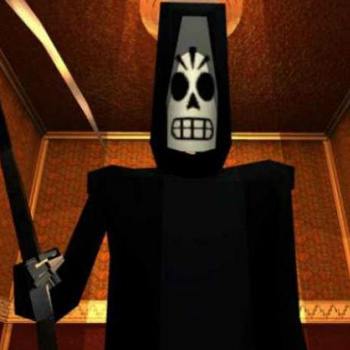 The hero's name is Manuel "Manny" Calavera. We don't know much about his life; but we do know what happened to him after he died. In case you didn't know, the Land of the Dead is where all people are reincarnated after death, looking like puppet-like skeletons. The Land of the Dead is very similar to the world of the living: people work, have careers, fall in love, and can even die again, turning into flowers. And they all await their final destiny - a trip to the underworld. Depending on their deeds in life, they might get a good journey or be destined to walk there without any means. Manny works in a travel agency that takes care of such trips. But recently, something has been going wrong. Manny is unable to get good clients, and he suspects there is a scheme to falsify the dossiers of dead people and to offer the best trips to scoundrels for bribes. Manny's grand adventure begins as he steps into the world of corruption and intrigues.

Grim Fandango describes several years of Manny Calavera's life. Influenced by Mexican mythology and Art Deco, the game combines 3D characters with pre-rendered backgrounds. It has plenty of branching dialogues and complex inventory-based puzzles. The traditional mouse interaction was abandoned in favor of keyboard control for movements and actions.