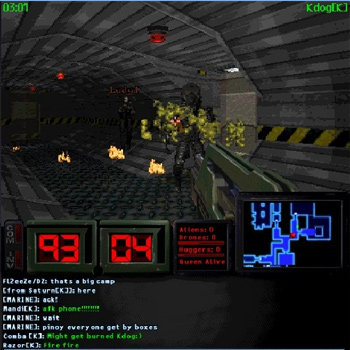 Aliens Online was a massively multiplayer first person shooter released on the GameStorm subscription service. Players could choose to wield a pulse rifle as a member of the Colonial Marines, or stick to the shadows as one of H.R. Giger's iconic Aliens. Gameplay pit the two species against each other in a standard team deathmatch with limited respawns. Players could fight in one of five initial maps, with multiple games running simultaneously and selected from an in-game chat area and browser.

Maps ranged from a loose reproduction of the colony from Aliens, to a derelict spacecraft with an Alien hive in the lower levels. Every map had cramped air ducts or sewer pipes that the Aliens could speedily, and usually securely, make use of - with hatches that allowed the player to drop onto unsuspecting marines and rend them with claw and tail attacks.

Marines carried a selection of long-range firepower based on the weapons in the film. A lone marine only had access to a pulse rifle, pistol, shotgun, and motion tracker (deployed like a weapon, and not part of the HUD). Up to four marines could also band together in a fireteam, unlocking heavy weapons like the flamethrower and the auto-tracking SmartGun. Members of a fireteam could also open minature "helmet cam" windows for each of their teammates, and see a feed of what that player was seeing.

Kills and victories resulted in experience points, which were permanently tracked by character. XP milestones granted stat-increasing ranks to marines, making veteran soldiers tougher and deadlier. A similar system also existed on the Alien side, with XP points granting the ability for one player per open game to play as the Queen - a bigger and tougher Alien requiring teamwork to take down.