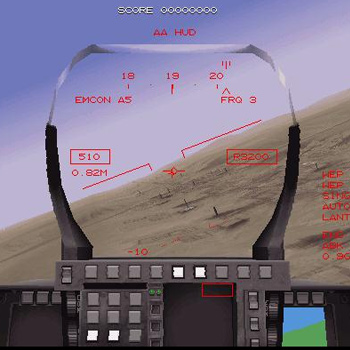 In F-22 Air Dominance Fighter, the successor to DID's EF2000, players get the chance to fly the advanced fighter from the US Air Force in a war.

You have control over up to 4 F-22 ADFs. or an AWACS. With the F-22 you fly miscellaneous missions such as air-to-ground or air-to-air or protect the AWACS around the war zone. If the AWACS are down you are sightless, making the mission harder to complete. From the AWACS you have control over all aircraft and you can send out commands to protect an aircraft or attack the enemy.

Unlike the later Total Air War, there is no dynamic campaign. All missions in the game are defined - start from point A, fly over B, Attack by C, going home over D and land by A, for example.

Before you go to the warzone you have a chance to learn to fly the F-22. Over 30 instruction missions involve taking off, landing, miscellaneous weapons trainings, AWACS training, dealing with miscellaneous hydraulic and electrical failure, and many more.