Disney's Ready to Read with Pooh 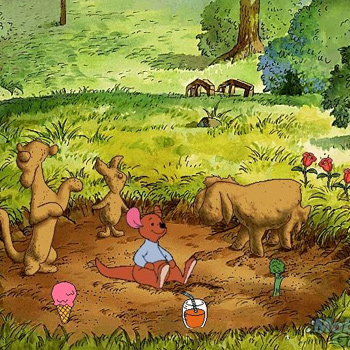 Literary bear and animated film star Winnie the Pooh sets the stage in this educational game from Disney, as he drifts down to the ground via balloon to land outside a Treehouse which becomes the home screen. Gopher provides a mailbox with the player's name on it, and Pooh sets down a honey pot which becomes the options screen. On returning to the Treehouse from elsewhere in the Wood, the personalized mailbox may contain messages from game characters who will read the letter out loud when the mailbox is clicked on.

The player begins here in the Hundred-Acre Wood, and travels along one of three paths to the North Woods, the East Woods, or the West Woods to find a number of reading activities, each one introduced by one of Pooh's friends. Actions are performed by pointing and clicking the mouse; the cursor is a bee that flutters it's wings whenever it is over a clickable spot, and carries an arrow when it's over a path to a new area.