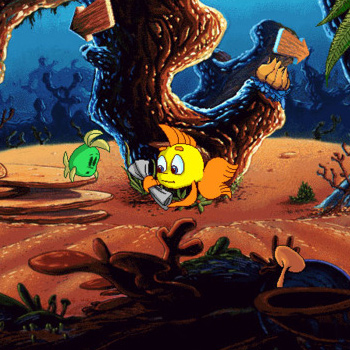 Not the average drawing and painting program, Orly's Draw-A-Story is best described as a total entertainment package. Every scene contains humor and personality. Set in Jamaica, the user is initially introduced to Orly, an adorable young waif with a lilting Jamaican accent, and her frog-sidekick, Lance, who sums up most situations by saying "Ribbit-man." They invite the child to venture with them into one of four storybooks as a partial illustrator/animator, or to create and illustrate the user's own, original story.

Each of the stories begins with narration by Orly. As the story progresses, it reaches a point where the user is asked to create either a character or a prop to be used in the further telling of the story. At this point, a drawing pad containing a few basic elements of the picture to be created appears (such as a monster's eyes, or a boat's steering apparatus), accompanied by basic drawing tools: pencils, paints, eraser, and textures and patterns. A special screen can be opened to reveal a number of pre-made drawings which can be used as-is, or modified. At no point is the user confined to accept these drawings; they can be endlessly manipulated and made into unique illustrations. When the drawing is complete, it is incorporated into the next section of animated story. This process continues with the user completing a sequence of pictures to create a cumulative story which can be saved and watched again from start to finish. Each of the drawings can also be printed.