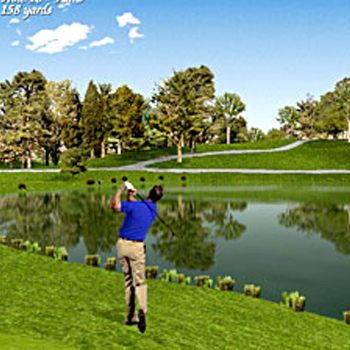 Links LS 1998 Edition is the first game in the Links series to run in native Windows 95 mode. "Look ahead" rendering sees the game predict where your next shot will be from, reducing redraw times. There are two new offline tournaments for a total of six, and an internet play mode. Perhaps in response to Tiger Woods' success at the time, a black-skinned golfer is added to this version. You now view other golfers on the main play screen, and the action is tracked by 8 smart cameras. New visual enhancements include water reflections, waving flags, blimps, balloons, airplanes and environmental haze and fog.

The standard 3-click swing is still used in this version, as well as the fine-tune adjustments for swing style, draw/fade, chip, lob, bump & run and of course, load up that driver and let 'er rip. There are now 6 modes of play including Scramble, Alternate Shot, Match Play, Best Ball, Skins and Stroke. In addition to the Kapalua Village, Plantation and Bay courses in previous versions, the 1998 Edition also adds Arnold Palmer's favourite course, Latrobe Country Club (and can run courses from previous versions). Palmer also provides multimedia features.