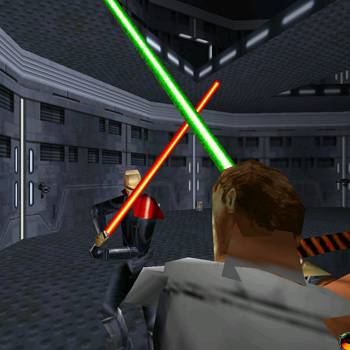 This is a sequel to Dark Forces. The game is set in Star Wars universe and its events occur after the second trilogy (Episodes IV to VI). Once again, you play the role of Kyle Katarn, a former mercenary, and now an ally of the rebels. Kyle discovers that he is in fact a Jedi, and is on a quest to find his lightsaber and to learn the techniques of the Force. The evil Sith lord Jerec, who was responsible for the death of Kyle's father, is on a quest of his own, searching a mythical place called Valley of the Jedi, where his dark powers could be unleashed. Will Kyle be able to stop Jerec and become a true Jedi, without falling to the dark side?

This is a first-person shooter that lets you switch to third-person perspective. You can use blasters and rifles to take care of your enemies, and later in the game you'll also be able to participate in lightsaber duels. You can also use Force powers, both of light and dark kind. The game has a branching storyline with different endings, and your decisions can lead you to the light as well as to the dark side (for example, killing innocents will add you "dark points"). The game features videos with live actors as cut scenes.