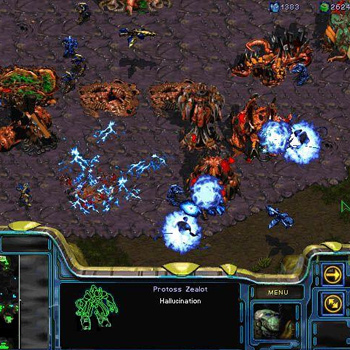 In the distant future, a small group of human exiles have been doomed to fight for survival on the edge of the galaxy. Through military strength, espionage, and deceit, a unified Terran government has maintained an uneasy peace. But as resources and fuel run short, the Confederate nations find themselves looking towards the rich worlds of their alien neighbors, the enigmatic Protoss. To further complicate matters, it seems that a previously unknown species-- the Zerg-- has entered Protoss space and is destroying everything in its path. The time for war has come.

Gameplay in Starcraft has clear similarities to Blizzard's earlier Warcraft 2. Building units requires credits and a power source, and once completed you can direct them into combat with foes. You only know the layout of terrain you have visited, and only the exact whereabouts of enemy units which are range for one of your units, due to the Fog of War.

Each of the 3 races has a distinct range of units and general strengths - Zerg units are quick to build, Terran units cost the least, and Protoss units are the most powerful individually. Missions varying from destruction to infiltration. Realistic line-of-sight calculations make the correct result more likely. A full map editor is provided, with many user-created maps available online.