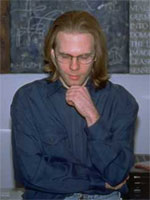 John Carmack and the development team at id Software can be credited with introducing a whole new perspective, literally, to interactive entertainment. With the 1992 release of Wolfenstein 3-D, game players were placed into the headspace of the characters they controlled and the first-person shooter genre was born. DOOM followed a year later, featuring a first-person perspective so convincing that stationary game players would report feeling motion sickness. Due to the immense popularity of DOOM, it was not long after that first-person shooters began appearing from everywhere.

Despite the increased competition in the genre, Carmack's work continued to stand above the rest. Carmack made another major contribution to 3D technology with his work on the engine which drove Quake, the revolutionary game which first realized a true 3D environment in which game players could operate, further opening the first-person shooter genre to new creative possibilities.

Carmack is currently working on the technology that will continue to expand the boundaries in which game experiences take place. To the delight of gaming fans, id Software has plans to revisit the worlds they introduced in Wolfenstein 3-D and DOOM with this new technology.