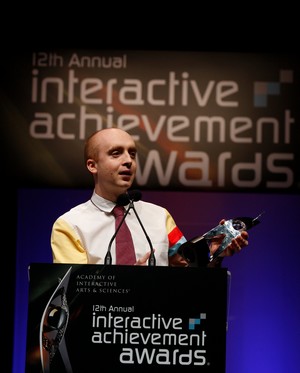 Alex Evan is a member of the Academy of Interactive Arts and Sciences.  He spoke at the D.I.C.E. Summit® in 2009.  He works for Media Molecule.

A: The number of hand written fan letters from 4 year olds showcasing scribbly artwork they’ve re-imagined from your game.

A: Top’n’tail – the really fertile bit at the beginning, just messing around; and the final, final, tunnel of light where you actually ship the damn thing.  The middle bit itself has phases: wherein you lost site of your initial good idea; realise what you’ve made sucks in several significant ways; rebuild it (several times); lose sight once more of the original idea; (hopefully) eventually recapture something of the original seed, by now actually usable; and finally enter the glorious ‘tunnel of light’ towards the end.  All of these middle phases effectively only happen because of many, many hours of grind – or ‘turning the handle’ as my old math professor used to call it.


Q: If you weren't in game development, what would you be doing today?

A: I had a place to study at MIT on the same course as the amazing chaps who created the ‘processing’ visual sketch language, so I sometimes look at the impact they’ve had and wonder what would have been if I hadn’t taken that first game job... I think my mum would have loved me to be a nice young doctor, but I think I’m too much of a misanthrope.

A: I think I’ll pick the whole ICO team’s output, and the team itself. I’d love to work with them or see how their games are produced.


Q: On a practical basis, what’s the one thing you’re going to tackle next?

A: I’m bored of all games having the same basic surface description – it makes everything and every game look like it’s made out of crinkly matte plastic. But so far, this damn kitten in my new engine testbed just doesn’t look right.

A: After spending time at SIGGRAPH 2009 in New Orleans, the meme I seemed to smell strongest amongst the game papers was “do really expensive stuff, just like last year—but this year, we only do it where we really need to.”

A: Not really, but they are fun so they’re never going to go away.

A: Yes. Although I have to admit to gross hypocrisy - my greatest pleasure is watching games being played by other developers, rather than actually playing them myself.

A: Growing up.  The industry is already ‘growing up’ – the sense I think of is things like being content to have its own visual, critical, interactive language that isn’t just a reference of other media; or of not being embarrassed to take itself seriously; or not just pandering to a narrow audience.  All of these things are challenges that seem –wonderfully – to be progressing along beautifully.


Q: Finally, when you look at the future is there one great big trend that affects everyone?

A: I tried, and I failed. I need new long-distance glasses.  I am sure there are trends, it’s just that I’m not confident to predict any of them...  In the paraphrased recent words of John Carmack ‘I think predicting the future is above my pay grade’

At MediaMolecule we tend to fixate on themes that fascinate us (creativity, for example), and essentially spend our whole time trying to achieve that with the best tools of the day.  The day changes, the tools change, but the theme doesn’t.  I’m sure it’ll mean that we phase in and out of ‘trendiness’, but with enough quality and dedication any idea can be made timelessly relevant.  At least, that’s what I tell myself...