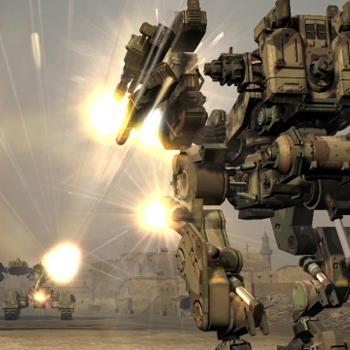 This squad-based action title puts gamers in control of giant mechanized military weapons of war. Chromehounds offers an intense, photorealistic look at war from the cockpits of colossal metal vehicles. These heavily-armed weapons of war, called HOUNDSs, dominate ground battles during warfare in the near-future. Squads of HOUNDs take to the field in international factions, cooperating with and complementing each other in terms of firepower, range of movement, and abilities. Domination of the world is the prize for the mightiest army on the field. Strategic planning, snap reflexes and communication are key to winning the day in this battle-hardened action title. Players take the role of either a Squad Member or a Tactics Commander, who is responsible for strategically guiding the team to victory with verbal commands on Xbox Live. In addition to supporting both cooperative and competitive online modes, the game offers thousands of upgrade options, which effect both the look and performance of player mechs. Strategic gameplay puts the player in the role of 'tactics commander'; manage your squad while testing your reflexes on the battlefield. Xbox LIVE support offers cooperative and competitive campaigns for up to 12 players at once.