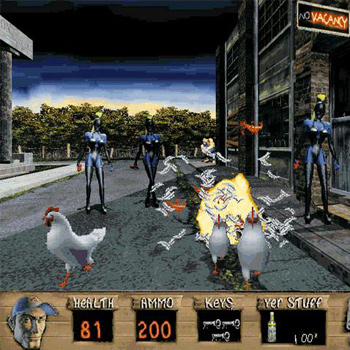 Redneck Rampage is a pseudo-3D first person shooter much like Duke Nukem 3D, with 2D sprites for enemies and other objects. In fact, it uses the same Build engine as Duke Nukem 3D.

Redneck Rampage also has a singularly unique setting... instead of taking place in an alien installation or secret government facility, the game is set in the backwater small town of Hickston, Arkansas.

It seems that a bunch of tabloid leather-fetish cyborg aliens have abducted the town's stereotypical redneck inhabitants and cloned them. The aliens have also abducted Bessie, the prize pig of brothers Leonard and Bubba. As Leonard you'll have to fight the local yokel clones as well as the aliens throughout Hickston to rescue your pig.

The 'Redneck' theme is used very heavily. Levels range from trailer parks to chicken processing plants, and the arsenal of odd weapons include a gun that shoots circular saws, a TNT crossbow, and even a machine gun bra. Also, instead of armor and health kits, you restore health and become tougher by drinking whisky and eating pork rinds. But if you drink too much you go into "drunk mode" with blurred vision and stumbling movement.