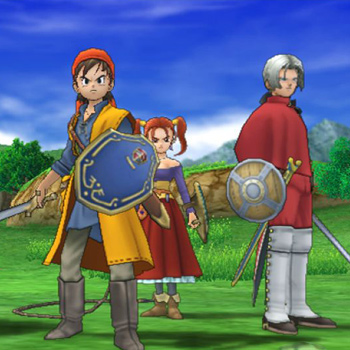 Enix's internationally popular Dragon Quest saga continues in this 3D adventure for PlayStation 2. The game tells the story of a spiteful court jester who finds a magic scepter and unleashes a terrible curse, turning peasants into thorns and nobles into wild beasts. Players take the role of an unassuming castle guard who is somehow spared by this curse, although it seems to have afflicted nearly everyone else in the land. To save the kingdom, the hero must recruit allies, explore the countryside, and battle the many enemies that stand between him and his quest. Combat is turn-based, and players can customize the ways in which individual party members fight. The North American release of Dragon Quest VII features additional cut scenes and voice acting not present in the Japanese original.