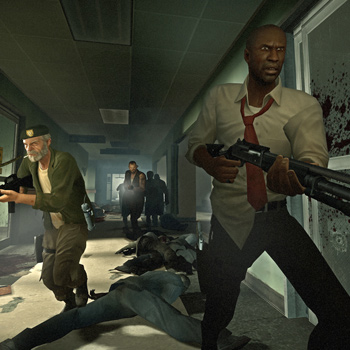 Fight together...or die alone. A new and highly virulent strain of the rabies virus emerges and spreads through the human population with frightening speed. The pandemic's victims become grotesquely disfigured, wildly violent psychopaths, attacking the uninfected on sight. One of the "lucky" few apparently immune to the sickness, you, unfortunately, are also trapped in a city crawling with thousands of the bloodthirsty Infacted. Together with a handful of fellow Survivors, you must fight your way to safety or die alone. A co-operative multiplayer action game from the makers of "Counter-Strike," Left 4 Dead is built atop the most advanced version of the Source Engine and introduces version 2 of Turtle Rock's artificial intelligence (A.I.) technology. [Valve]