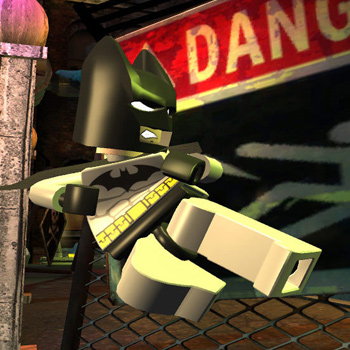 The Dynamic Duo hits the bricks in LEGO Batman: The Videogame. In the game's main campaign, players take control of Batman and Robin for familiar bust-and-build action and puzzle-solving adventure through more than a dozen levels of Gotham City -- re-created completely from Lego brand toy building blocks, of course. There are plenty of thugs, goons, and even supervillians ready for a brawl along the way, and Bat-gadgets, vehicles, and a special-purpose "tech suits" allow the Caped Crusaders to make their way through various precarious situations.

Once the good guys have won the day, another full campaign has players taking the roles of the bad guys, including favorites such as the Joker, Catwoman, Mister Freeze, the Penguin, Poison Ivy, the Riddler, Scarecrow, Two-Face, and others. Different characters have different abilities, and it sometimes takes teamwork to overcome an obstacle and progress to the next area. As in the earlier Lego games, collection quests and other side activities may allow players to create even quirkier mixes and matches.

LEGO Batman is the first co-production of Warner Bros. Interactive and its 2007 acquisition, TT Games, which includes developer Traveller's Tales. The game features the humor, action, and family-friendly presentation found in the developer's popular LEGO Star Wars games, while incorporating characters and content from nearly 70 years of Batman comics, cartoons, television shows, movies, and music available under the publisher's license.