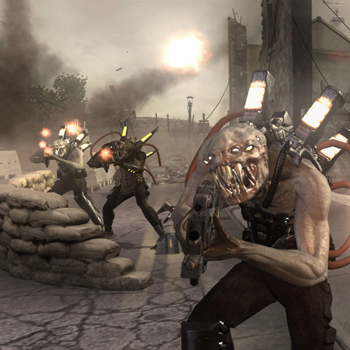 In Resistance: Fall of Man, the and band together in a last-ditch effort to save Europe and Asia from a horrific scourge. In mere decades, the Chimera - a species of unknown origin propagating a virus that converts other life forms into more Chimera - has overrun and all of Europe . Humanitys hope for survival is slim, and the tide of the battle rests on the shoulders of U.S. Army Ranger, Sgt. Nathan Hale. Resistance: Fall of Man draws players into a deep, frightening story that rewrites the 20th century and pits the and against a horrific species of unknown origin. In addition to an epic single player campaign, the game features co-op, split screen multiplayer and highly customizable online gameplay. Greater processing power on PlayStation 3 and Blu-ray technology enables more immersive visual and sound effects in Resistance: Fall of Man, heightening the chaos of large-scale warfare. Insomniac Games has combined its passion for creating exotic weapons and vehicles with a proprietary physics system to create a unique human and alien arsenal.