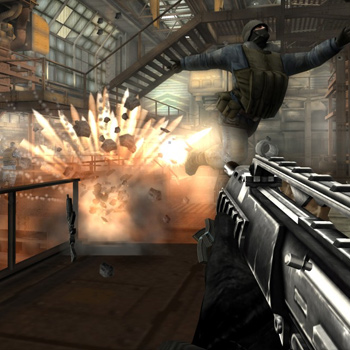 Join the world's most brutal and enigmatic strike force. The BLACK tactical squad operates under the cloak of complete anonymity and deniability to protect the from threats foreign and domestic. It answers to no one, allowing it to carry out brutal and overt operations around the globe. From manipulating politicians to controlling intelligence networks and militaries, BLACK operatives are trained at the highest level in psychological warfare, espionage, and lethal arts. Go deep into the world of clandestine warfare as you use any means necessary to get the job done. Overt Action: BLACK operatives do not hide in shadows or sneak behind walls waiting for the right time to engage their foe - they destroy the wall, the enemy, and anything else that gets in their way. The Guns Are the Stars: An explosive arsenal of bleeding-edge weaponry lets you experience the awe-inspiring power of the world's most exotic lethal firepower. If You Can See It, You Can Shoot It: Reduce cities to rubble in a world where virtually nothing is impervious to your bullets. Get Your Blood PumpingAdrenaline is your friend. Visceral, destructive action sucks you deep into the gameplay as you blaze and blast your own path through open-ended environments. Use destructible worlds and explosive objects to take out enemies in cover, frag multiple enemies at once, or just wreak massive destruction for its own sake.