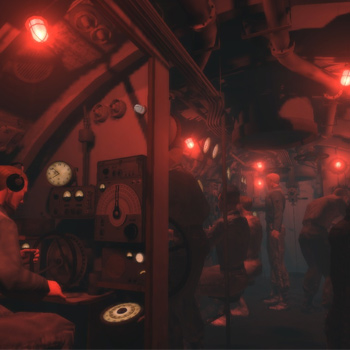 Command the cunning and deadly U-boats of the North Atlantic and experience the tension-filled atmosphere of a WWII submarine movie. The King of submarine simulations returns with an all new 3D game engine, new crew command features and more realistic action than ever before. The game includes a career campaign, patrols that have both fictional and historical missions, a mission editor and multiplayer feature. Whether it is stalking convoys or dodging depth charges, players will experience their own personal war story. The spectacular graphics, multiplayer options, and suspenseful gameplay combine to create the most impressive submarine simulation ever.

Command your crew:
The crew will take orders and evolve based on the results of each patrol. Commanders must consider morale and fatigue in decision making. A reward system will advance rank, elevate skills and bestow medals for achievement.

Accessible to players of all skill levels:
Includes a 3D interface  what you see is what you use. Players will experience a simplified learning curve that will be easier to handle than standard simulations. Use the naval academy tutorial to learn the basics. Customize the realism settings for play that appeals to a variety of WWII combat fans.

A deadly array of U-boats and weapons:
Playable U-boats include type II, VII, IX and XXI submarines. Take aim against Allied convoys and warships. In recreating the great submarine battles of WWII players will hide in silence just below threatening escort ships, fire deadly torpedoes or surface and pound enemy with the deck gun.

Multiplayer with both cooperative and competitive modes:
Join a wolfpack with other live players and take aim against intelligent AI-controlled opponents. Test your skills against other players to determine the ace commander.