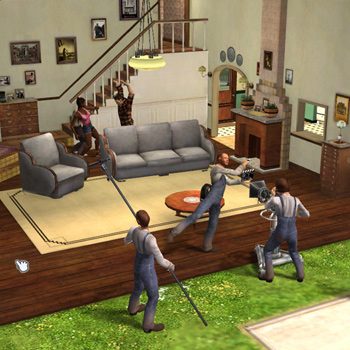 Imagine you could make any movie you wanted to. Imagine you could pluck someone from obscurity and turn them into a superstar. Imagine you had control of an entire movie studio, competing with other studios to create box office hits and predicting what audiences wantfrom epic action films to campy B-movies. With The Movies, you can make it big in Hollywood by building the ultimate movie studio and shooting the ultimate picture. Choose a script and turn it into a major release. Pick or create actors and locations. Control budgets, build sets, hire and fire at will, settle into the directors chair and film a hit. Customize unique movies within the game, then watch and review them, adding your very own voiceover or sound effects and saving them to your hard drive. E-mail your masterpieces to friends, upload them to the web or post them on The Movies official site for the world to see and vote on in online awards ceremonies. Just as you can create or modify unique films, you can create or modify actors, customizing their look and renaming them to resemble anyone you wish. You can even replicate every movie star currently in Hollywood and remake all your favorite films with them. Anything you've ever read about Hollywood, from starlet scandals to broken box office records, is right here in The Movies.