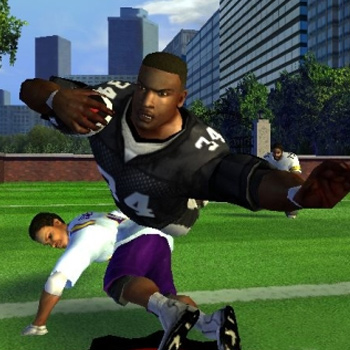 Get ready for more fancy moves, new modes, and online play in the sequel to NFL Street. Now you can jump 15 feet high to make catches off the wall, dive into the end zone, or pull off wild jukes. You can master these new abilities in seven new game modes, including "crush the carrier" and "own the city." Create your own player, master new skills, and hit the streets both offline and online.

NFL Street 2 adds a whole new dimension to gameplay with wall moves and high flying football this year. Now for the first time, receivers can run off the walls, change passing lanes by running the QB up a building, and take advantage of eye-popping wall jukes and all-new hurdles. Players will descend on Bay City's 10 new environments in an all-new persistent world to build their teams, their reps, and their battle plans one field at a time. Once you own the walls, you will own the city.