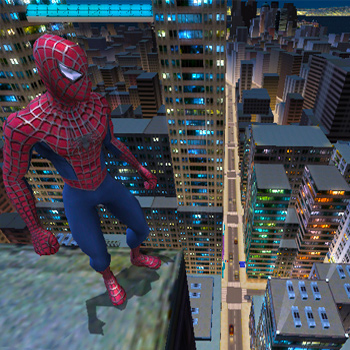 Based on the big screen sequel to the original "Spider-Man" with Tobey Maguire and Kirsten Dunst, Spider-Man 2 features a new bad guy, Dr. Otto Octavius, who becomes grafted to a set of four mechanical arms which he can use to amazing effect... as a "mad scientist" some call "Doctor Octopus" or "Doc Ock." Can Spidey avoid getting clobbered by two of Doc Ock's metallic appendages while avoiding the other two?

The gameplay of this sequel, unlike that of the straightforward, mostly linear original, lends itself much more to the sense of freedom and exploration made popular with "Grand Theft Auto III."