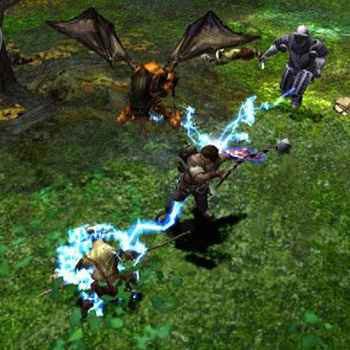 Features:
- The modern interpretation of the original Bard's Tale, the grandfather of all role-playing games, by its original producer - Brian Fargo.
- A new generation third-person, action/role-playing game featuring wicked humor and clever personality.
- Forget the quest to save the world, our hero is interested in just two thingscoin and cleavage. Play the role of the Bard as he gets swept up in a harrowing adventure that proves too much for countless chosen one but hopefully not for you.
- Use the Snarky/Nice conversation to pick the tone... be an ass or show some class. Your attitude will affect the events that unfold and create a personailized experience for each player.
- Develop your combat party by summoning a group of eccentrics and misfits to do your bidding - sixteen summoned creatures in all.
- Brilliant graphics and bustling environments, alive with interactive townsfolk, original music (with singing), birds, animals, rustling trees, waving grass and trickling water, that immerse the player deep into the Bard's world.
- Based on the storied land of the Orkney Islands off the coast of Scotland - the inspiration for the classic fantasy worlds.
- Driven by the next generation of Snowblind Studio's Everquest: Champions of Norrath Engine.