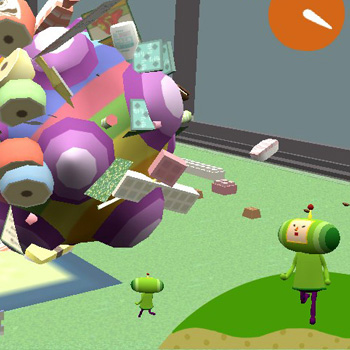 Cookies and kebabs, lawn mowers and lamp posts, synchronized swimmers and sumo wrestlers, bulldozers and windmills, giraffes and brontosauruses, Ferris wheels and cruise ships beware! The stop-at-nothing pushing prince is coming. When the King of All Cosmos accidentally destroys all the stars in the sky, he orders you, his pint-sized princely son, to put the twinkle back in the heavens above. How, you ask? By rolling everything and anything on earth into clumps, so he can replace what's missing in space.

Players steer the Katamari from a third-person perspective using the analog sticks on the PS2. A tutorial stage takes the player through the controls and sets up the story as well as introducing a side story about a Japanese girl who can feel the cosmos. Wanting to challenge the prince, the King sets requirements on the Katamaris size and sets time limits on the level. Bonus missions restore constellations and have their own restrictions.

The world of Katamari Damacy is brought to life with off-beat animation and a catchy soundtrack. Players can find presents hidden in the levels that contain accessories for the prince. Two players can also battle head-to-head in a Katamari competition.