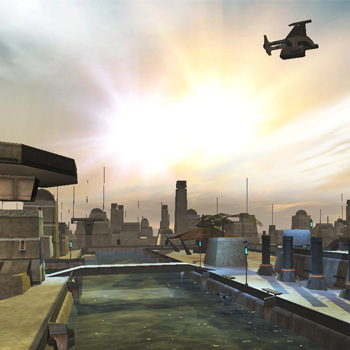 There was a time when most of the universe left Rubi-Ka to itself. "It's just a barren rock, a mining colony on the other side of space," people would say. Those times are over...

Rubi-Ka is the only known source of notum, an element that holds the key to technology and progress. The galactic economy is defined by notum, and whoever controls the notum has acquired a solid foundation for ultimate power.

Join a thriving online role-playing community of thousands of players, teams and organisations. Explore and control land, mine notum, and construct towers to defend your territory.

* Your organisation can control land and obtain game-play advantages by setting up notum-mining controllers.
* Purchase or build towers that will attack intruders and defend your controller.
* Service towers that fight for you and give you bonuses in both solo and team play.
* Ground-based fighting vehicles add new and exciting possibilities.
* Move around quickly and explore Rubi-Ka from above in the brand new Yalmaha flying vehicles.
* Customisable in-game voice commands!