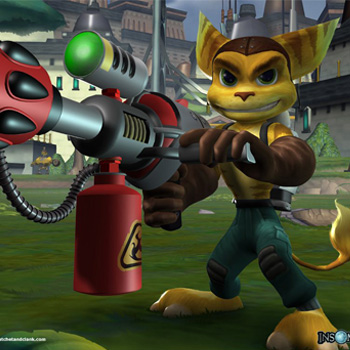 Ratchet and Clank is a platform/adventure game in a similar vein to the 3D versions of the Rayman, Sonic, Mario or other games. It involves the two protagonists (Ratchet, a furry alien creature and Clank, a nerdy little robot) going on a quest to find Captain Qwark and ultimately to help save the galaxy.

Ratchet and Clank includes many of the best features of previous similar games, but makes itself unique in a number of ways. Firstly each of the games levels are huge sweeping vistas with extremely detailed buildings which are visible at all times (i.e. there is no distance fog). This means that a building on the horizon is not just a "backdrop"... in all likelyhood you will be exploring it in a few moments time. Secondly, the game includes a number of sub-games, such as a space fight sequence and a number of turret shoot-outs which are akin to "Missile Command" in the first person.

The game has over twenty levels (planets) and includes as many real-time cut-scenes which unfold the story. Also of note, the story is non-linear, requiring the player to return to previous levels to complete objectives and to choose between multiple paths forward. There is also a respectable array of weapons, gadgets and accessories to find or buy as the game progresses, which offers some unique gameplay features.