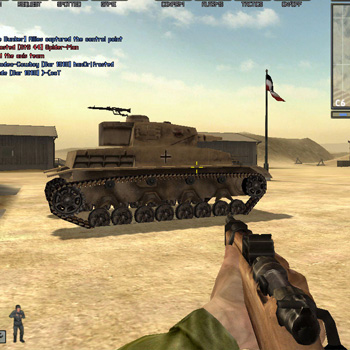 Battlefield: 1942 is an epic war sim set amongst the World War II environment.

As a soldier of the United States, the United Kingdom, Japan, Germany or Russia, you will have access to twenty weapons, all modeled from that time period. You will also be able to control over 35 different vehicles, spanning land, sea and air. You will be able to pilot fighters and bombers, command destroyers and frigates, or drive APCs and tanks.

Combat takes place in four theatres, all from WWII; there's the South Pacific, North Africa, and Eastern and Western Europe.

Going online, you can play with up to 64 players. For multiplayer mode, everything in single player is accessible, so you can choose to fight, again, on land, sea or air.